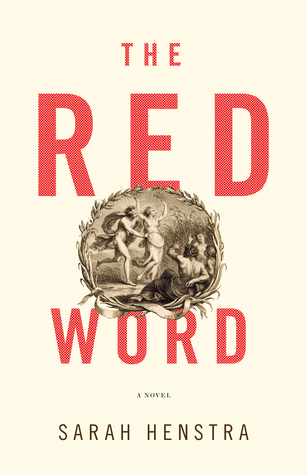 Sarah Henstra, despite most marketing blurbs I’ve read, is not merely a fresh young voice graduating from her YA novel Mad Miss Mimic (2015) to her debut adult novel The Red Word; she is a PhD-holding professor and graduate practicum director at Toronto’s Ryerson University. Her specialization is 20th-century British literature, upon which she has various scholarly publications. She is a board member of the Canadian Creative Writers and Writing Programs (CCWWP), and she was on the steering committee of the 2016 Canadian Writers’ Summit. Already, she is busy with a new work of fiction entitled Dear Little Jo. Yet for all of her pedigree and hard work, Sarah Henstra has delivered a novel that finds trapeze-artist balance between wide accessibility and complexity. With such a sensitive and contentious subject, she somehow manages to avoid satire and kitsch on the one hand, and sterility on the other. The Red Word is gripping, important, and probably not what you expect.

The first thing that makes this book a treat to read is its formal structure. Henstra is concerned with the mythology of women and sexuality, and she takes us back to the cultural origins: Hesiod, Homer, and the Greek tragedians. As such, the book is divided into three main parts and given Greek titles: strope, antistrophe, and epode. Each of these three sections is further subdivided into scenes with Latin or Greek titles: e.g. invocatio, exordium, diaskeue. Revealing the combination of teacher and creative writer within her, Henstra parenthetically subtitles these classical words with a short English “definition” that reminds me of the sections in Roland Barthes’s A Lover’s Discourse. As if this pleasantly pedantic and mimetic framework weren’t enough, there is a khoros section that fulfills the classical function of the chorus of Greek tragedy, and our narrator constantly lapses into the epic mode.

The story reminds me Donna Tartt’s The Secret History (though Tartt’s prose style carries with it a much longer career of craftsmanship); Marisha Pessl’s Special Topics in Calamity Physics (though not as conventionally playful and sans exam questions); Jeffrey Eugenides’s The Marriage Plot (which other reviewers have pointed out); and the 2010 film Easy A (though the film brings Hawthorne’s magnum opus into the modern high school). Like Tartt, Henstra’s book incorporates much from Greek mythology. Our protagonist, the Canadian Karen Huls, falls in with a group of girls who wish to write their own female mythology. Like Pessl’s book, The Red Word is rife with the erudition of intellectuals at a mid-1990s university, but without being kitschy or overly pedantic. Henstra packs in and spaces out just enough intellectual discussion to guide and not condescend the lay reader. She gives us all the standard characters one would expect, but also drops in a few rogue personalities that keep the pot boiling.

The narrative arcs back and forth between the present (told in the first-person present tense) and the past (told in the first-person past tense). Karen Huls (in the present) is now years down the road from her college days and is having to travel to the vicinity of her old college for a presentation. Coincidentally, one of her college roommates has passed away and the funeral will be held while Karen is in town for the presentation. The conjunction of these events presents a Dickensian coincidence that provokes her memories. The bulk of the book takes place in 1995-1996 at an American Ivy League university and concerns the salacious goings on at Gamma Beta Chi, a fraternity notorious for its bacchanalia.

The true strength of the novel is its ethical and moral complexity. At first I felt that Henstra was piling cliché on cliché until I feared I was reading something the former Dorchester Publishing’s Leisure Books imprint would have published in mass-market paperback. But Karen quickly proved to be a rather elusive personality, and the situations between the feminist warriors of Raghurst and the lecherous satyrs of GBC began ratcheting up in complication, risk, and intensity. But along with the plot-thickening and conflict, I found myself presented with more and more of those gray situations from ethics courses that left my cohort stumped and divided for hours. Henstra is not willing to bring paper-thin characters onto a ready-made diorama and give us a tidy ending full of poetic justice. Rather, Henstra wants us to think from multiple perspectives. Yes, she implodes and lays bare the various mythologies that we subconsciously absorb, but she never resorts to deus ex machina or convention, even at the expense of (perhaps in an effort at) jilting our expectations.

The Red Word is raw in its unflinching depiction of college rape culture, the endless labeling and grading of women based on sexual value, the inherent codification of brotherhood and its reinforcement through social class. More than just a fresh salad made with the same old ingredients from feminist literature, we are lead into a situation where not all frat guys are the same and not all feminists are alike—and to some extent there are parallel behaviors between archetypes that leave no side of the debate unchallenged. Within these groups is a wide range of beliefs (or lack thereof). It’s where these beliefs come from that is important. It’s how to rewrite the mythologies passed down since the beginning that is important. Stopping the hamster wheel long enough to examine it. This starts, I believe, with grasping the dynamic complexity of gender politics. If you find yourself put off by the multitude of ossified critical texts on the subject, or confused as to what the fuss is about in general, I suggest The Red Word. Once I started reading it, I couldn’t put it down. And I can say that my thinking (or non-thinking) has been exposed and challenged.