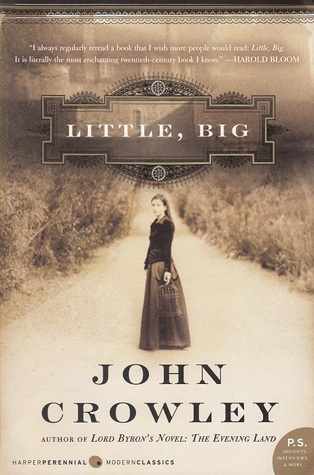 A curious title with an implied “and everything in between.” Close, far; natural, supernatural; rational, irrational—and everything in between, represented throughout the book by the Germanically-capitalized Somehow, is what one encounters once the title page is turned. John Crowley has appropriated the fantasy novel and made it his own. He has razed the boundaries between literary and genre fiction, chastening my former distaste for fantasy. In Little, Big everything is alive, everything possible, and what is perceived by the adult reader as bad is yet good when viewed through the eyes of a child.

END_OF_DOCUMENT_TOKEN_TO_BE_REPLACED

The following is an attempt to compile a trunk of books to take to a deserted island, where I will be marooned for a year. For this list, I try to refrain from the more common, canonical, immortal selections like Shakespeare, Milton, Woolf, et al. My own gloss accompanies each selection.

END_OF_DOCUMENT_TOKEN_TO_BE_REPLACED 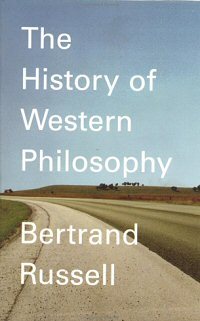 Grad school piqued my interest in philosophy, and once I had free time to read what I wanted (i.e. once I graduated), my first foray into the daunting ocean of philosophy was Will Durant’s admirable book The Story of Philosophy: The Lives and Opinions of the World’s Greatest Philosophers. It was refreshing to gain some context to many hitherto familiar names, to begin going beyond a purely nominal understanding of western philosophy. I thought of working through Copleston’s 11-volume history thereafter but opted for the arguably more ambitious step of absorbing original sources. I read (slowly) through what I considered the major works of Plato (The Republic), Aristotle (Ethics, Politics, Poetics), Spinoza (Ethics, Theologico-Political Treatise), Descartes (Discourse, Method), Bacon (Essays), Hume (An Enquiry Concerning Human Understanding), Kant (Critique of Pure Reason, Prolegomena), Hegel (Phenomenology of Spirit), Schopenhauer (The World As Will and Presentation), and Nietzsche (Human, All Too Human). Seven years later, I found myself in need not only of a reinforcement of all that I’d ingested but also some means of putting it all together. As it turns out, Russell’s inimitable book was just what I needed to add some cohesion to the story.

END_OF_DOCUMENT_TOKEN_TO_BE_REPLACED 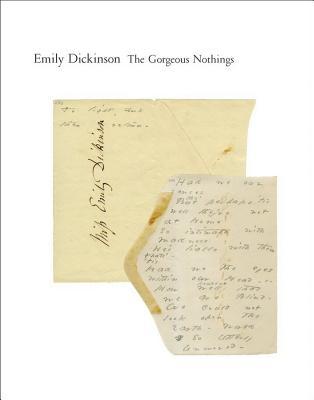 This book is a triumph, its worth well beyond the $30 listed on Amazon at the time of this writing. It is a treasure of my library very much akin to my Thames & Hudson edition of William Blake: The Complete Illuminated Books. Dickinson’s envelope poems and Blake’s handmade illuminated poems represent an eternal discourse on the marriage of medium and content. Yet while Blake’s process was an arduous task of writing and illustrating backwards (so that his self-invented press would stamp everything in the proper direction!) to produce copies to distribute himself, Dickinson’s envelope poems represent a mind bursting with thought and a hand desperate to keep up.

END_OF_DOCUMENT_TOKEN_TO_BE_REPLACED 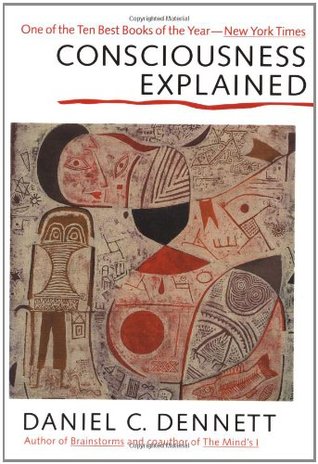 In a way I wish the book had been named Dennett’s Theory of Consciousness, Explained–although, I’m not sure I would have read a book of that title (who wants to read yet another person’s theory?). Indeed the book’s audacious title does its job well in terms of marketing: I purchased and began reading the book with great gusto. But, obviously, since the book was published in 1992 and we here in 2016 still cannot agree that consciousness has been explained, we know that Dennett doesn’t deliver on what we perceive as his initial promise to give us “…an empirical, scientifically respectable theory—of human consciousness” (4). Sure, while there is an abundance of scientific experimentation used in the argument of this book, we ultimately get what Dennett calls “a family of metaphors” (455). So, despite the anticlimactic ending, Dennett does give us an explanation, and I cannot say the journey wasn’t worth it.

END_OF_DOCUMENT_TOKEN_TO_BE_REPLACED 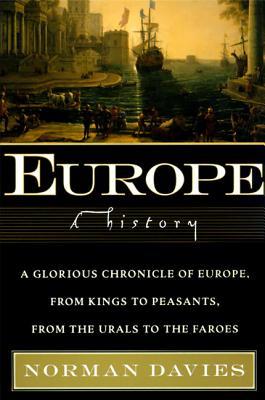 The big book that got me flagged by TSA. I was travelling to Boston recently and, as always before a trip, I was in the throes of anxiety over what reading material to take (I’m afraid I’m of the die-hard printed-book persuasion). With two hundred pages left to go in Davies’s sprawling tome, I didn’t want to lose the momentum of weeks of reading, so, despite its significant heft, I stuffed it into my carry-on bag. And that bag got promptly flagged and taken aside at airport security. After several questions about what might be in the bag, my anxiety growing sharper, the agent pulled out the ample brick. In the agent’s words, “this book is too dense for the scanner.” Luckily, its physical density does not also apply to its content.

END_OF_DOCUMENT_TOKEN_TO_BE_REPLACED 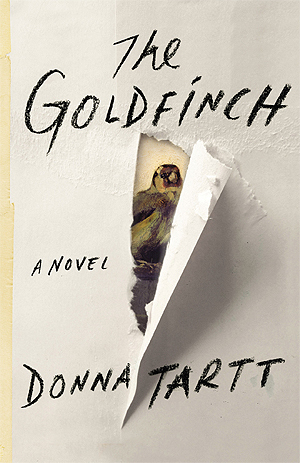 Allow me to eschew the well tread ground of the parallels between Tartt’s latest novel and Dickens’s bildungsroman Great Expectations and the symbolism of the book’s eponymous painting as an analogue to Theo Decker’s own ineluctable tethering. Instead, I would like to address what seems to be the more pressing question: People seem to be more interested in whether they should read the novel than in actually reading it. I discovered a lengthy thread on the LitNet forums where the original poster (OP) spends numerous posts seeking a sort of support group from the community just to get off the ground with the novel. Then follow further posts concerning the number of pages the OP has managed to read that day and more queries for affirmation that the OP is doing the right thing in reading the novel and sticking with it. To be sure, this is an extreme example, but from what I can tell from a sampling of other opinions, this book seems to pose a daunting threat to many readers.

END_OF_DOCUMENT_TOKEN_TO_BE_REPLACED 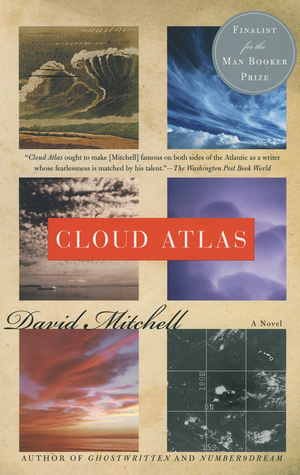 I tire of much contemporary fiction because, for the most part, it pales in comparison to older, mightier literature of the canon; and as I find myself “reading against the clock” (to borrow Bloom’s words) it’s hard for me to expend my precious reading hours on literature that doesn’t have a payoff confirmed by many ages before myself. Still, I take chances in the name of curiosity and, I suppose, keeping at least a pulse on the state of current fiction. And yet oftener and oftener, when I take these chances, I find myself disappointed and wishing I had allotted the time to, say, absorbing some unread Shakespeare play, Borges short story, or perhaps tilling the soil of some of Montaigne’s vast corpus of wisdom. But—alas!—with this treasure of 2004 from one David Mitchell, disappointed I was not! Far from it, in fact.

END_OF_DOCUMENT_TOKEN_TO_BE_REPLACED 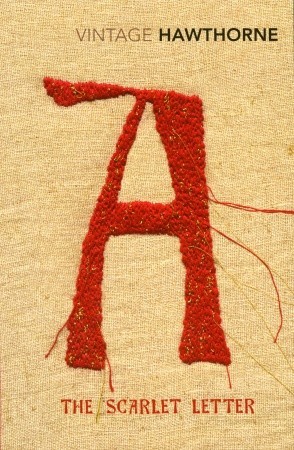 In Why Read the Classics?, Italo Calvino’s first definition of “a classic” is a book “about which you usually hear people saying, “‘I’m rereading…,’ never ‘I’m reading….'” (3). By this he essentially means that, if one were to read, say, The Scarlet Letter outside of high school, one would never admit to having never read it before, especially if one were held in high esteem for literary knowledge. I, however, choose to shed all pretensions and fully admit that, though I had read Hawthorne’s short story “Young Goodman Brown” (in many ways similar to this novel), before this past weekend I had never read Hawthorne’s magnificent allegory. And I’m glad for it.

END_OF_DOCUMENT_TOKEN_TO_BE_REPLACED 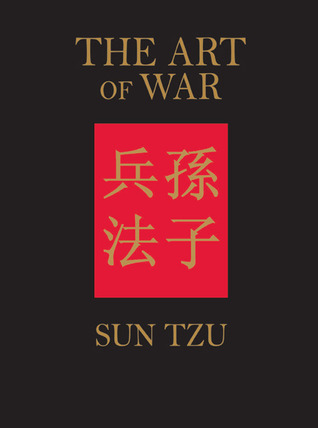 Contrary to western bias, Socrates was not the progenitor of the maxim “know thyself”; in fact, this was a truncation of Sun Tzu’s maxim which boils down to “know thyself and know thy enemy”: “…if you know yourself and know your enemy, you will gain victory a hundred times out of a hundred”; “…if you know the enemy and know yourself, you are sure of victory” (21, 69). This is not to discredit Socrates (or rather Plato’s Socrates), however—to be sure, Sun Tzu’s and Socrates’s audiences and purposes were quite different. What we get with The Art of War is an almost entirely pragmatic manual for generals to successfully conduct war.